In 1911 the young engineer Karl August Geyer had a great vision in mind when he founded the Kino-Kopier-Gesellschaft m. b. H in Berlin, which several decades later became famous as “Germany’s oldest film factory”. Some decades of digitalisation later, the original company no longer exists. But innovation still blows through the former company headquarters at Harzer Strasse 39 in Berlin-Neukölln. On 26 September 2019 – more than a century after Geyer entered the building for the first time – young CleanTech start-ups met at the same location, today betahaus Neukölln, at the EIT Climate-KIC Demo Day to present their innovations in the field of climate protection.

Shaping the future with innovations

The day was moderated by Fritz Lietsch, entrepreneur, visionary and managing director of the magazine forum Nachhaltig Wirtschaften. But before he invited the first of the 16 pitching start-ups onto the stage, he invited Beñat Egaña on the stage, co-lead of the European EIT Climate-KIC Accelerator.

In his welcome keynote, he spoke about the big WHY behind the Accelerator programme: “We at EIT Climate-KIC are fighting climate change together with our large partner community – through innovation”. To do this, the minds behind the innovations must be brought together with investors, Beñat Egaña continued, and that is exactly what Demo Day is all about today.

Fortunately, this is also possible on all other days of the year – with the help of the EIT Climate-KIC Investor Marketplace launched last year. On the largest platform of its kind, CleanTech start-ups and investors can network with and among each other. 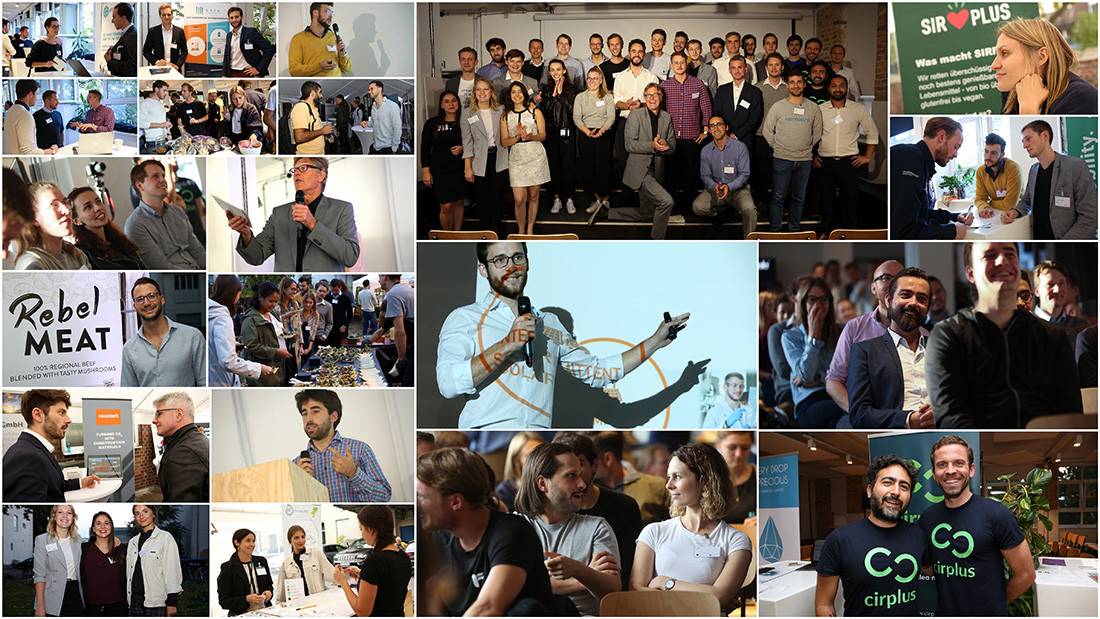 Pitch round 1: from concrete to sewer inspection

The first eight start-ups presented their innovations to the audience. The first was alcemy from Berlin, whose innovation made it possible for cement and concrete producers no longer to produce excessively strong concrete. This not only saves costs, but also drastically reduces CO2 emissions.

Immediately afterwards, the stage was taken over by Kraftblock from Munich with its thermal energy storage system, triply from Vienna with an environmentally friendly event transport concept and Gaia Membranes, which wants to drastically reduce the costs of storing renewable energies in flow batteries and hydrogen with a new type of battery membrane.

During the one-and-a-half-hour pitch break, all visitors, armed with a snack, fell on the 30 exhibiting start-ups. They were ready to answer all questions of the interested participants. As last year, the food rescuers from SIRPLUS in Berlin were also there, saving food from the garbage can that can be eaten very well, surplus or expired food.

Anyone interested in the climate-friendly renovation of houses quickly ended up at ecoworks, the first German provider of net-zero modernisation. The highlight: industrial prefabrication, modular construction and highly efficient energy systems enable multi-family houses with up to four storeys to be refurbished within a few weeks. After this modernisation they will generate at least as much electricity over the year as the tenants consume heat, hot water and household electricity.

Pitch Round 2: from fish monitoring to burger love

The different ideas from all industries, with which the young entrepreneurs pitched, caused astonishment: the intelligent fish monitoring of MonitorFish is, which supports fish farmers in extreme way against fish dying, the KI-Gebäudeverwaltungssystem of DABBEL, which converts hotels or office buildings into greener real estate or the idea of Christian Schiller, Cirplus, which is the first global the first global market place for recycled plastics.

There are too many ideas to describe individually, although they all deserve it. One more idea should be noted, however, which managed to arouse equal interest among the otherwise seemingly incompatible groups from vegans to meat eaters and everything in between: REBEL MEAT. Here, burger patties are produced that taste like meat, but in fact only contain half of it. Local organic beef is mixed with locally available mushrooms. The three founders want to drastically reduce meat consumption – and make the world a better place. The REBEL MEAT production method could also be used for the market launch of expensive “Clean Meat”, i.e. meat that is bred directly from muscle cells. 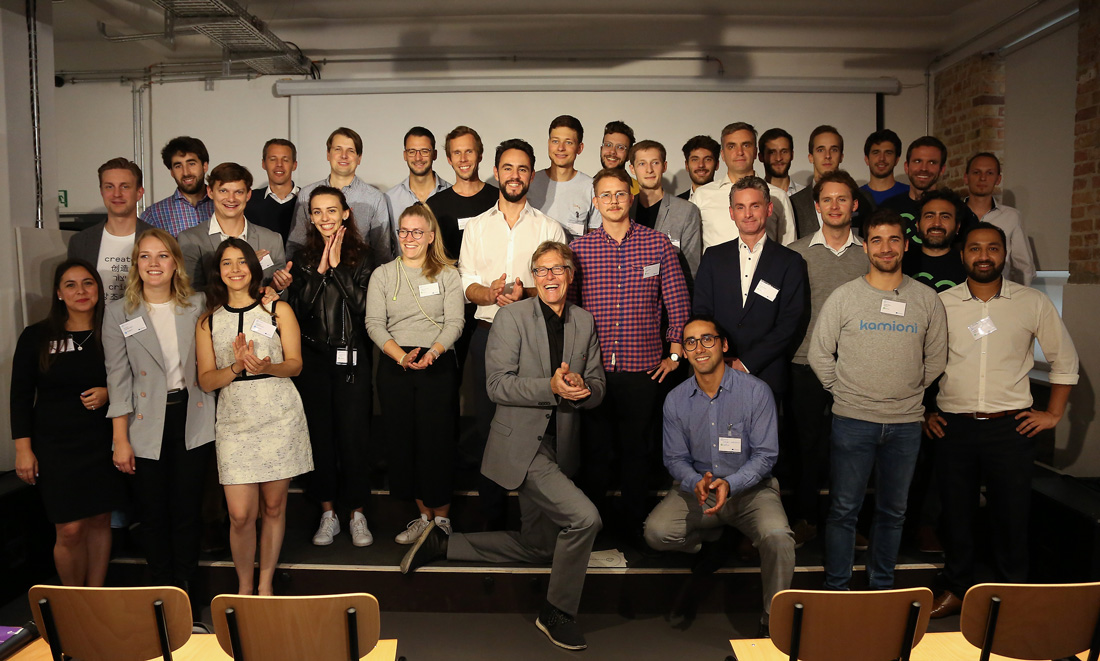 While the autumn sun slowly left Berlin, the mood was not affected by the onset of darkness: investors and start-ups put their heads together, recommendations were made, tips were given and introduced to each other. Right in the middle was Aimee Apel, DACH Start-up Accelerator Co-Lead, who visibly enjoyed the evening’s end with satisfaction. “We look forward to the Demo-Day every year. It is the chance for the start-ups to present themselves. It’s innovations from small teams trying to change the future. We bring them on stage, show all their hard work, connect them with people who can finance them – that’s just great,” she explains. “We’re all driven by a mission. It’s about the 1.5 degrees celsius – and it’s about changing the way we think and behave in everyday life. That’s what we’re here for.”

The original article was written in German.

For the latest news from the EIT Climate-KIC community,...

Click here for our latest news
Briefing from E3G: The Political Economy of Industry Transition towards Climat...

This briefing provides the main takeaways from EIT Climate-KIC...

Briefing from E3G: The Political Economy of Industry Transition towards Climate Neutrality in Germany
Winterbatch 2020 Accelerator Side Call – a digital KIC-start!

Winterbatch 2020 Accelerator Side Call – a digital KIC-start!
Your exclusive chance to join our Accelerator!

Over the last nine years, the EIT Climate-KIC Accelerator...

Your exclusive chance to join our Accelerator!
The Corona Canvas: How you can deal with the crisis as a founder

The current situation is clearly severe and much worse...

The Corona Canvas: How you can deal with the crisis as a founder
Renewable energies, at any time: Gaia Membranes and the new efficiency in ener...

Everybody knows: After a few years, but mostly after...

Renewable energies, at any time: Gaia Membranes and the new efficiency in energy storage
Is Germany ready for the future? Read E3G´s new report to find out!

E3G´s new report “Is Germany ready for the future?...

Is Germany ready for the future? Read E3G´s new report to find out!
Semi-vegetarian burger, full of meat: The founders of REBEL MEAT want to stir ...

Making the world a better place is the mission...

Semi-vegetarian burger, full of meat: The founders of REBEL MEAT want to stir up the meat industry
A circular future (?) – Watch the interview with Dr. Leyla Acaroglu

With the workshop series ‘Circular Futures‘, CRCLR and EIT...

A circular future (?) – Watch the interview with Dr. Leyla Acaroglu
The closed plastic circuit: How cirplus wants to put an end to plastic waste

Kevin Caners is a Berlin-based journalist who is experienced...

This year’s next generation of climate innovators has just...

16 new teams in the DACH Accelerator came together...

Every year, EIT Climate-KIC and its partners provide students...

Journey 2019: Future Changemakers in Germany, Austria and Switzerland
We’re closing for business in solidarity with #GlobalClimateStrike

EIT Climate-KIC will close this Friday 20 September*, the...

We’re closing for business in solidarity with #GlobalClimateStrike
Save the date! 26.9 Demo Day in Berlin

What to expect The Demo Day is the big...

An exciting night with Climate-KIC startups and investors
85,000 euros and more benefits for green start-ups

Europe’s largest accelerator for cleantech start-ups is starting its...

There is one thing for certain: the population in...

Stories from the Green Garage: Artificial Intelligence & Fish?!
Studying Business and working in Sustainability; how can you combine that?

I have wondered about this and other questions since...

Studying Business and working in Sustainability; how can you combine that?
Fraunhofer-ISI: Innovations needed for decarbonization of industrial sector

On behalf of the EU Commission, the Fraunhofer Institute...

Climate protection initiative gives a preview of the German...

Our Viennese start-up HYDROGRID was awarded the State Prize...

Climate change is making headlines. Media outlets around the...

Bill Gates was invited to be the first guest...

From industrial 3D printing as a service and a...

Investing in our world, investing in the future: Climate-KIC DACH Accelerator Investor Dinner 2019
Please confirm you have read and accept our Privacy Policy