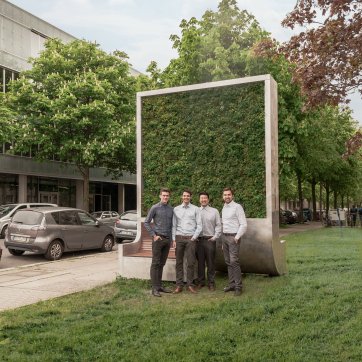 Green City Solutions is a start-up supported by EIT Climate-KIC. Its CityTree moss-culture technology scrubs pollution from city street air where air flow is poor and pollution is heavy.

Every day 90 per cent of cities’ inhabitants breathe polluted air which causes every 7th death worldwide. In addition, this leads to a yearly economic damage in the amount of more than 5 trillion US Dollar.

Green City Solutions is a start-up, supported by EIT Climate-KIC, that has developed the CityTree. Its moss-culture technology scrubs pollution from city street air where air flow is poor and pollution is heavy.

The CityTree is a customised solution for urban spaces designed under the criteria of sustainability and combines a vertical plants’ display with air purification. The vertical flat-panelled device combines moss and wireless technology, controlling humidity around the moss, which then acts as a filter, taking pollution particles out of the air. The plants can be arranged freely on the CityTree to display visual information like colour logos or a QR-Code, which links to additional digital content.

The modular design ensures the stability of the plants while being space-saving, lightweight and air permeable. A digital monitoring and control system optimizes the climatic air effect and plant care.

This urban air purification product serves as a platform for companies to actively improve cities, to mitigate climate change and as an instrument of authentic sustainability communication. Cities benefit from a microclimatic engineering service providing additional possibilities to utilise unused spaces.

The role of EIT Climate KIC

Green City Solutions was part of and received support from EIT Climate-KIC, winning the German round of the Venture Competition in 2014.

CityTree has been supported as a Scaler Project under EIT Climate-KIC’s Urban Transitions theme since 2016, to show the impact of the innovation on an urban environment and at an urban scale.

If technology is like new, only better, then this...